We want to give you the latest infos for the coming Demonstration
We hope everybody ist still motivated to take the next steps together on saturday to defend our existing autonomous spaces and for the fight to create new spaces in which we can act and organize ourselves together.

We find it necessary to try out new demo-concepts in order to give space for experimentation with the structure and the development of our demo-culture . The structure of the demo will include organized groups instead of sticking with old rigid structures. Let’s move together in solidarity – Together we can stand our ground. Lets protect eachother so we can be dangerous together.

In the last few years we have seen how Berlin is changing through the process of gentrification that expels us from our neighborhoods, through evictions (5.000 per year), rent increases, making life unbearable and increasing policing of public spaces[…]

The city is being sold to capital; used as a touristic attraction available only to those privileged enough to pay very high prices for chic newly built or renovated spaces, with construction companies and speculators profiting, the practice repeated by real estate agencies and endorsed by the institutions of state and governance.

excerpts form the Intersectional Call for the Demo

The demo starts on Helsingforser Platz and will soon cross the huge street Warschauer Straße and enter the „Südkiez“ called Southern Quarter of Friedrichshain. The „Südkiez“ is more or less square, limited by Warschauer Street on the west, Frankfurter Alle on the north and trainlines on the east and south. Exept for Boxhagener Street all streets cross each other at a right angle, forming square blocks of four to five storey houses. Many of the old houses have been modernized and host, just like some new luxury buildings tourists as well as people with money and a notable amount of bars. Still, the area is also inhabited by former squatters in legalized house-projects, poor people with older rentcontracts and those without flats. In Grünberger Street the demo will pass by the house where Maria B. lived and died from shots fired by cops in January. Soon after that, leaving also the self-organized social space Zielona Gora and the central Boxhagener Square behind, we will enter Mainzer Street. Once being an autonomous zone with most of the buildings squatted, today there are no traces left of these times and the furious battle that marked not only its end and but also a turning-point of the east-berlin squatting movement.

The establishment of red zones, militarized security tactics and surveillance are the means used to prevent us from moving freely in our neighborhoods. Approaching this in an intersectional manner, the relationship between different forms of domination, such as racism, heterosexism and capitalism, affects us in a distinct way.

By crossing Frankfurter Allee and thus the underground line U5 we enter the so called rebellious „Nordkiez“. Conntecting its most western part, the Bersarin-Square and its most eastern part, the trainstation Frankfurter Allee, the 1 km long Rigaer Street crosses, again in right angles, several streets that slightly rise towards the north. Like the lately famous Liebigstreet, the bigger Proskauer street or the Silvio-Meier-Street, which is named after an antifascist fighter who got killed 1992 in the subway-station next to it. The „Nordkiez“ is less touristic than the „Südkiez“ but in the last years a lot of empty grounds were filled up with concrete and glass for masses of rich people. Those hostile objects can easily be identified by the modern architecture. The other houses and houseprojects are filled up with normal people who are hostile, indifferent or friendly towards the things that are happening in the western part of Rigaer Straße, mainly the so called „Dorfplatz“, the junction of Liebig and Rigaerstraße. Sometimes refered to as a common ground for struggle and neighbourhood activities due to the combative communities of Rigaer94 and the Liebig34 being close by, things around „Dorfplatz“ are very tense since the latter got evicted on the 9th of octobre.

Northwards, uphill behind the „Nordkiez“, lies a newly built settlement including shopping opportunities. Most of the people here are voters of rightwing parties, their homes include private gardens, their cars are new and shiny and some of their houses have cameras added to supplement the social control. The area is more or less triangular, with the train line on the longest side fencing off the north-east side. Here, in the heart of the bourgeois, the demonstration ends.

Moreover, we see how during the current pandemic, evictions do not stop. This, in many cases, deprives people of the only spaces where they could feel safe, let alone give eachother the strength to be dangerous together in the face of their oppression. Once again, BPoCs, women and LGBTQI+ people, the homeless, the unemployed, people with precarious employment or people with functional diversity are being affected the hardest by these capitalist practices. This doesn’t mean we stay isolated. We have our self-organized support networks and we fight to destroy this system of power, oppression and dispossession. We are prepared to show our teeth and claws to those who want to drive us out of our spaces and homes. For all these reasons we call, on October 31st, to fill the streets of Berlin with an empowering demonstration. Let’s all take over the streets.

Please Wear masks & gloves to protect yourself and others. Familiarize yourself with the route and surroundings. Think about how you can get involved in the demo together with your buddies, friends and/or in the affinity group, to take the initiative and to react to what is happening around you. Pay attention to the people around and to information being spread and loudspeaker announcements. To protect yourself and your friends don’t forget to bring a neutral rain jacket and umbrellas. Bring a change of clothes and if you wish a hat/cap and sunglasses

Please don’t film or take photos during or around the demo, the memories are safer in your head and can not be accessed by cops or the media. For many people it can be a problem to be on photos even if you think that nothing is happening in that moment. Rest assured the media will try hard anyway to get photos of the demo (if we don’t hinder them).

Known tactics of the Berlin cops on demos:
The Berlin cops and their counterinsurgency tactics have been developped over decades, some of them specific to Berlin – not least because of the city’s rich presence of handy cobblestones.. The following information is based on experiences from past and is not foreknowledge of the cops’ actions on that day.

A rather common procedure before demos is to control the starting point, so that people can hardly get to the starting point of the demo without being controlled. But they seldomly control everybody and in the worst case you can enter after the demo has started walking. Also, but less frequently, the cops in the immediate vicinity check the access roads as well as the nearby subway stations.
Often the cops try to control demos by walking close to the demo or even in rows right next to the demo. One extreme is the kettle, where the demo is closely shut in by cops from all sides. Here there are some behaviors that make it harder for the cops to surround the demo, such as trying to take not only the whole street but also the sidewalks.
In general Berlin cops don’t keep distance but try to be close and intervene quickly. Pepper-spray is used quite often.

There are no public cameras in Berlin, but if something happens the cops try to get access to material from potential private surveillance cameras around the area.
The Berlin cops film a lot, and focus with the camera on details such as shoes or other features of clothing (trademarks, colorful seams, patches, stains etc). In addition to securing “evidence”, the aim is to identify alleged perpetrators at a later date, since arrests often take place later. The cops often wait until after the official dissolution of the demonstration or even arrest people nearby hours later. Screens, banners or other items and appropriate clothing make it more difficult for the cops to film or recognize people. Think of what to do with your change of clothes if you were involved in a turbulent situation.

If you experience repression during or after the weekend, please feel free to contact us via e-mail at interkiezionale@riseup.net so we can know about all consequences of the weekend and support you with anything you might need.

All forms of expression of anger are welcome, except those that include any kind of discrimination.

As Interkiezionale we keep up our call to the international action and discussion days of 30.10.-01.11.2020! We would like to inform you briefly about the current status of the preparations. 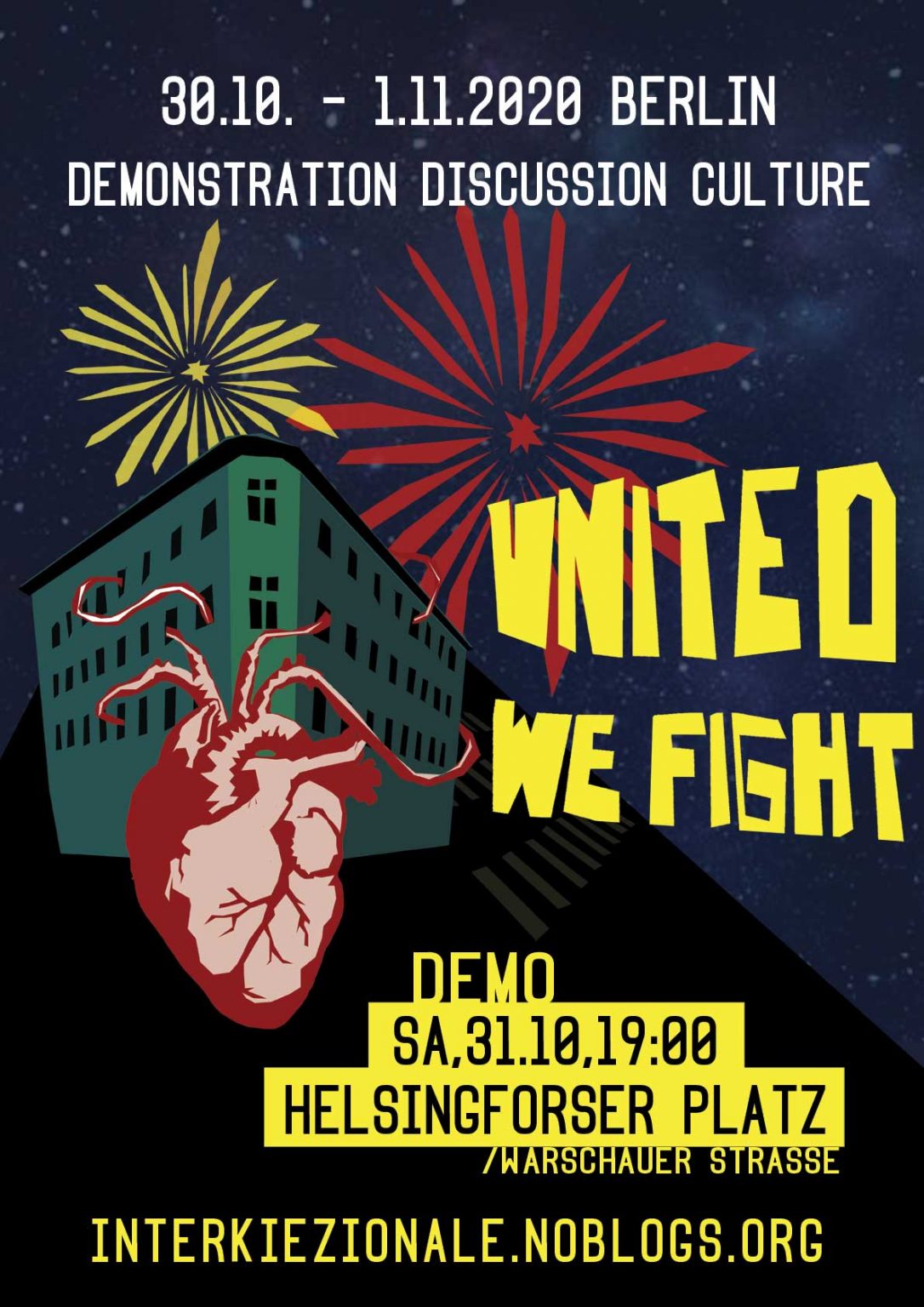 The spread of the Corona Pandemic, especially in a cold autumn like this one, and the governmental measures and regulations that accompany it, present us with new challenges. Clearly, we must and want to take care of each other and not endanger our health. END_OF_DOCUMENT_TOKEN_TO_BE_REPLACED

Dear people out there, to all solidary comrades on the
Street here in Berlin and everywhere else.

With the evacuation of Liebig34 the repressive apparatus tries again to to break us, to intimidate us, to make us feel powerless and to be. Their huge police force, their surveillance, their Permanent siege should give us the feeling / we are the problem! END_OF_DOCUMENT_TOKEN_TO_BE_REPLACED

Statement that was read out during the Liebig 34 press conference on October 6th, during which a representative of the collective was taken into custody in front of running cameras.

In recent years and especially weeks, many things have been said, reported, and conjectured about Liebig 34, the anarcha queer feminist corner house on Liebigstrasse with 30 years of collective history.
Now, shortly before the official attempt to evict it, we will say a few things ourselves. END_OF_DOCUMENT_TOKEN_TO_BE_REPLACED 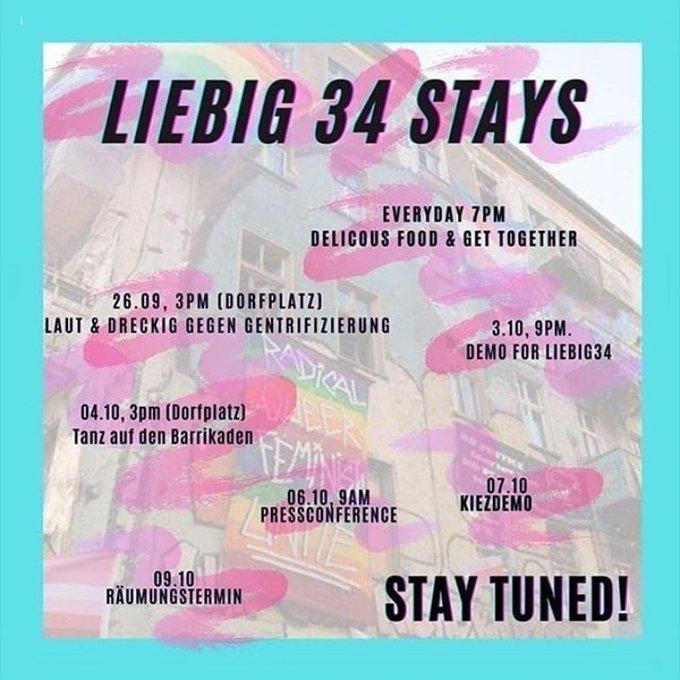 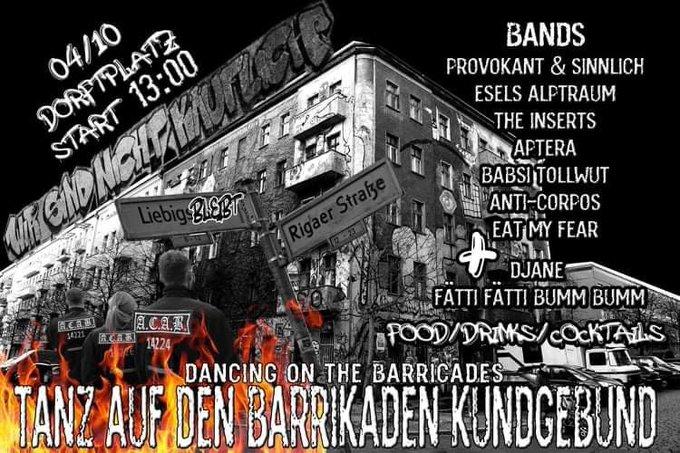 Dance on the barricades!
October 4, 14.00-21.00
On October 9th Robocops want to invade our neighborhood and will try to steal the Liebig34 from us. That will be stressful!
Let’s enjoy the time together and show that we have fun while fighting!
Dorfplatz stays loud and dirty!
Soli-cocktails, Küfa, flea market in the info store and cool concerts!
with: “Esels Alptraum”, “Provokant und Sinnlich”, “The Inserts”, “Eat my Fear”, “Babsi Tollwut”, “Aptera”, “Anti-Corpos”, “DJ FÄTTI FÄTTI BUMM BUMM” (last chance to dance!)
You can have our hate, you will never get our laughter!

A message from the collective to our allies outside!
If you like to listen here 4 minutes, and share the vid, thanx!